psql is a great tool. Oftentimes, output of the particular command in psql is too big to fit on one screen, hence outputs are wrapped to fit in one screen which becomes output unreadable. To custommize command output in readable format we have system variable called PAGER. If its on linux, I can simply set PAGER variable with LESS command + options to view command ouptut in readable format.
Eg:-
export PAGER=‘less -RSX’

Whereas on windows, you can customize psql output like linux, but with the help of windows tool less.exe which is similar to linux. Below, I copied download link of less.exe, download the binaries which are in zip format and unzip to your desired location.
http://gnuwin32.sourceforge.net/packages/less.htm

Now, set the windows system variable PAGER and VALUE pointing to the less.exe location. Also, include less.exe location in “Path”.  After setting system variable, your psql terminal has all sort of functionality like LESS command in linux. “less.exe -F <filename>”, behaves as “tail -f” in linux. Many more feature in less.exe which I haven’t tried but you can give a try and make your psql output eye-catching :). 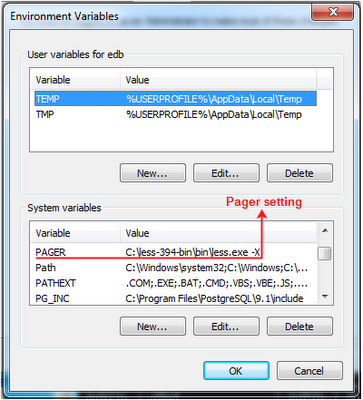